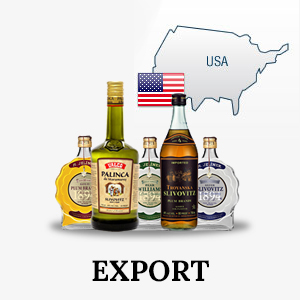 USA as the export destination has quite a long tradition commenced by Mr. Rudolf Jelínek with the first export of kosher plum brandy in 1934. This export developed into repeated business as early as in 1930ies and took roots on the key markets in New York and Chicago. The Company managed to maintain the export activities to the USA, though with breaks, after the War until 1990ies, which was a valuable asset for the new level of penetration to that key market during the last ten years.

An essential expansion of product distribution into 30 states of the USA occurred in this period, when the Group’s products are frequently sold not only in the key territories like New York, New Jersey, Chicago, California, Florida, but also by distributors in Utah, Colorado, Kentucky or Las Vegas.

A major shift also happened in the system of making business on that market, where direct relations with distributor companies in the individual states, contacts with retails and, thanks to them, with the customers, are under control by means of a partner company that provides import services.

The customer community in the USA is very wide, but it can be divided into three basic groups, with a certain simplification:

Czech community in the USA that can be found throughout the country, from California and Texas up to New York, where the probably most typical place is the Zlata Praha restaurant in New York Queens.

East-Europeans from Serbia, Croatia, Poland, Romania or Bulgaria, who highly appreciate Slivovitz and fruit distillates, are found mainly in Chicago. This market has the most products and specialities from Europe in the USA; on the other side, there is strong competition and price pressure here.

The “Jewish market” is very interesting and requires high credibility of the brand and a high quality standard. It must be proved by a kosher certificate issued by a renowned certification organization, in our case by OU (Orthodox Union of America), provided that the manufacturer meets strict production criteria under the supervision of an authorised rabbi.

All products exported to the American market have a kosher certificate. The basis of the offer of products consists of plum brandy – 5-year white, 10-year golden and newly also Silver Slivovitz Kosher for Passover. Pear Williams Brandy, a Williams variety pear distillate, and Bohemia Plum, fine, three times distilled grain vodka with delicious plum flavour are being built their position on the market.

The extension of the offer by adding Troyanska Bulgarian plum brandy and Romanian Valco Palinca was a new impulse for the development of overseas activities during the last years. These new brands by our subsidiary companies made possible for us to address new customer groups, as well as to get new business partners from among the distributors.

The United States belongs to the most important markets for the whole R.JELINEK GROUP, not only for the high margins on exports, but also because products of all the main brands of the Group are traded on this market.