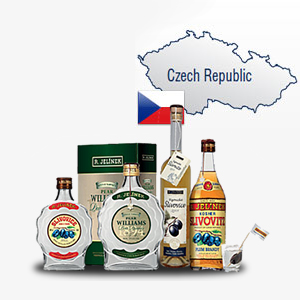 The RUDOLF JELÍNEK joint-stock company, which is the most important company within R. JELINEK GROUP‘s property portfolio, is engaged in the production of alcoholic beverages, especially fruit distillates. The tradition of production of fruit distillates at Vizovice goes back as far as to 1585. In 1882, Zikmund Jelínek appeared at Vizovice in the position of the director of a distillery for the first time, and he rented the distillery from 1886 on. The Company itself was established at the end of the century before last, in 1894.

The Company continues with the tradition of exporting its products abroad, which Rudolf Jelínek commenced by exporting kosher distillates to overseas markets in the USA as early as in 1934. Exportation now represents 34 % of the Company’s sales.

Other fruit distillates in the portfolio are plum, apricot, cherry and apple brandies.

Vizovická slivovice
The vintage series of the Slivovice brandy of the Company’s own orchards at Vizovice. It is a limited series, the first vintage of which was launched in 2008.

RUDOLF JELÍNEK a.s. is one of the biggest processors of fruit, especially plums for the production of plum brandy.

The Company’s efforts to continue with the tradition and history of orchard farming led to the foundation of the Company’s own plum orchards at Vizovice. The orchards have the area of 50 ha at present and nine varieties of extraordinary quality and hardiness are planted there – Čačanská Lepotica, Stanley, Gabrovská , Hanita, Presenta, Valjevka, Toptaste, Katinka and Čačanská Rodná.

The premises of RUDOLF JELÍNEK are suitable for social events due to their size, advantageous location and background near road infrastructure. The area for 20 000 visitors is used mainly for cultural events during the summer season. The unique environment of the Walachian nature and the irreproducible atmosphere of the original liqueur factory intensify the experience and, among other things, enable the visitors to take a look at the Company’s history, traditions and products. The best known and the most traditional events held on the premises of the factory are indisputably the Masters Of Rock festival, Vizovice Jelínek’s Degustation or the Vizovické trnkobraní (Vizovice Plum Harvest).

RUDOLF JELÍNEK a.s. is the owner and keeper of two recreational resorts that are found in the midst of the forests of the Chřiby highlands in the region of Zlínský Kraj:
Bunč forest pension – www.bunc.cz
Ranch Kostelany – www.kostelany.cz

The excursion and visitors’ centre called Distillery Land enables you to penetrate the secrets of the production of traditional plum brandy. It offers a visit to the Holstein distillery, distillery museum, homogenization, the area for maturation of whisky and golden plum brandy, bottling plant, and the degustation of products and the possibility of shopping in the company shop are a matter of couse.

The rooms of the Distillery Land can also be rented for company events, parties, expositions, presentations etc.
www.distillerylland.cz