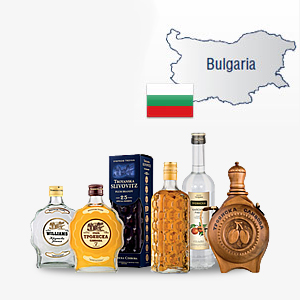 The VINPROM TROYAN is the biggest and best known Bulgarian manufacturer of fruit distillates, especially the plum rakija. The company is based in the city of Troyan situated at 160 km northwest from Sofia, under the mountains of Stara planina, and has very favourable climatic conditions for plum growing. The beginnings of the manufacture of plum rakija date from mid-19th century. The Troyan plum rakija has been manufactured exclusively from plums harvested in the Troyan area, which is confirmed by the registration in the European register of Geographic Origin Protection of products.

The basis of the product portfolio is the plum rakija, which is delivered to the market as “obyknovena“ or as the vintage, multi-year plum brandy that matures in oak barrels. The oldest Troyan plum brandy on the market is named “Reserva”, with the maturation period of at least 25 years. The Company also offers other fruit distillates like pear, apricot, cherry and apple brandy.

The main customers are partner wholesale stores which cover the whole territory of Bulgaria in full and possess a distribution network for retails and restaurants. The products are also listed in the majority of retail chains.

VINPROM TROYAN is also the exclusive distributor of VINPROM TETEVEN distillates, selected products by R. JELÍNEK and the METELKA liqueurs on the Bulgarian market.

In 2010, VINPROM TROYAN invested in the purchase of land for the purposes of foundation of their own plum orchards. 35 ha were purchased to date. The aim for 2011 is preparing the soil and beginning with the planting of trees.

Growing plums and distilling them, drying them or processing to plum jam and other products is one of the symbols of the city of Troyan, and that’s why an annual feast of plums and plum rakija has been held since 1993. The event takes place on the last weekend in September, and the nearby village of Orešak participates in it in addition to Troyan. Since 2011, the VINPROM TROJAN Company participates actively in regular Plum Feast, as a significant industrial processor of plums and manufacturer of the well-know plum rakija. The Company prepares an Open Day within the celebrations, for the visitors to be able to learn about the manufacturing process of their favourable drink in more detail, and they will also get to know the Company’s history and present life, as well as the tradition of growing and processing plums in the Troyan region.